skip to main | skip to sidebar

Repairers commonly report underpayment or no payment for various materials used during repairs. Meanwhile, shops’ costs for those products have increased dramatically over the past decade, causing P&M profit margins to dwindle by the year, says Rick Palmer, president of ComputerLogic.

One way to combat this is by using a paint and materials calculator, such as Mitchell’s RMC, PMCLogic or PaintEx, which allow shops to implement diligent documentation practices and improve insurance negotiation strategies. These software programs help take the guesswork out of P&M accounting, allowing shops to easily document and itemize all materials—from sandpaper to car wash soap to razor blades—to come up with a true cost for refinishing and an itemized invoice of the paint and materials used in a particular repair.

What’s more, systems like PMCLogic integrate with established estimating and paint systems, making generating an accurate P&M estimate easy and quick to do. Estimates for a specific vehicle type, Palmer says, include the amount of paint and materials that are expected to be used based on all of the panels, plus other items repaired or replaced. That system also factors into the equation other special conditions or requirements for each particular job. The result is a price generated from a database of industry information and current prices for the products used.

Ted Williams, manager of business consulting services at Sherwin-Williams, and Rick Palmer, president of ComputerLogic, discuss the top five ways shops should use P&M calculators in the shop.

1) Use the reports as a guide.

After inputting the information into the P&M calculator system, Williams suggests using the report as a guide throughout the repair process. He says that shops he works with will even print out a copy and put it on the window of the car.

“When a technician looks at it, they can use it as a guide,” Williams says. “‘Based on the repair that we’ve got, they’re saying we should use three sheets of this grit sandpaper.’ They can guide themselves. If they use five sheets, they know they used too much. They know what to shoot for as far as the amount of materials.”

Some shops even create job packs of product to put on the repair cart at the beginning of the repair based on that printout. For example, if the invoice says the repair should use three sheets of 180 grit sandpaper, the shop will get three sheets of 180 grit and store it on the cart. Williams says this ensures that technicians don’t use too much, and if they need more, they can easily record this in the system and can note the reason for needing more.

Williams says that above all, the benefit of a P&M calculator is that it is a tool for negotiating with insurers regarding reimbursement, which is something that Williams says many shops struggle with.
“They have to go into it with the right mindset,” he says. “They have to have the data and they have to talk about the data in a way to negotiate to get more materials.”

Williams says that the P&M calculator acts as documentation and should be used to prove to insurance companies everything that was needed to provide a quality repair for their policyholders.
“These systems clearly put materials usage in black and white,” he says. “The documentation details all of the expenses and provides logical explanations of the costs. And that’s what helps shops get reimbursed from insurance companies.”

One reason is because it provides adjusters with an argument to use when speaking with their supervisors. They’re able to explain why certain items were needed, and why they allowed the shop to exceed the P&M cap, Williams says.

“Insurers tend to side with shops more often when repairers can provide this type of documentation,” Williams says. “It doesn’t guarantee proper reimbursement, but it certainly helps you and will get you a lot more than not using it.”

Before negotiating, Williams suggests being as accurate as you can with the documentation and deciding beforehand what your minimum is.

3) Involve your jobber to speed up restocking orders.

One of the benefits of P&M calculators is that they interface with multiple systems, such as paint, estimating and vendor systems. This makes it easier to integrate multiple processes in the system, as well as get your jobber involved in the process. Palmer says that by allowing jobbers access to the system, they can rely on the information for reordering and purchasing.

“The jobber doesn’t have to go to the shop every week and count inventory,” he says. “They only have to go out twice a month. Either the shop can generate the purchase order for restocking from the system or the jobber can do it himself. They have their own login and can create a purchase order for the shop.” Palmer says allowing jobbers access to the P&M system ensures that they are ordering the correct amount of materials for the shop based on prior usage, meaning the shop doesn’t end up with an excess of inventory or too little with frequent restocking.

4) Bring the painters and technicians up front during the damage analysis.

Williams says that the key to using P&M calculators effectively is being accurate from the very beginning. One way to do that, he says, is by getting your experienced body technicians and painters involved in the damage analysis.

“They can tell you, based on experience, here’s how many tubes of adhesive and different things you’re going to need for that repair,” he says. “You can add to the initial invoice at the very beginning. I find even with the best shops, they’re not doing this and bringing the painter up to the front.”

Williams says to have the painter and technician review the estimate for estimate accuracy, verify the actual color, get the color match up front and have the technician map out any repair panels.
“What I’ve found is that typically by bringing the paint tech up there, we’re going to get more accurate estimates right out the gate as far as the right amount of hours, we capture materials that we probably aren’t getting paid for right now and we can do it at the beginning of the repair process,” he says.

5) Use the data as KPI reports to reduce waste.

Palmer says that in his experience, when shops embark on using paint and material calculators, they explore details of their materials costs that may have been overlooked before. And while the biggest gains in P&M profitability generally come from stronger sales and capturing all needed processes and procedures, there are gains to be made by measuring and managing your costs. That means that the shop is better able to track its P&M usage and reduce waste.

“How many sheets of sandpaper should they be using? For the last 90 days, according to what was used on that car, you should’ve used 5.5 boxes of sandpaper. You bought 10 boxes. I need to look into that,” he says. “They’ll say, ‘I got paid X dollars for paint and materials.’ We’d say, based on your actual cost factors, this is what you should have gotten back.”

If there are discrepancies in that data, Palmer says that you need to take a closer look and figure out where the shop is experiencing significant waste and the reasons for that. He says that common reasons include employees taking a can or two of materials for personal use, painters mixing too much paint, or simply incorrect cost accounting.

Posted by PMCLogic powered by ComputerLogic, Inc at 1:48 PM No comments: 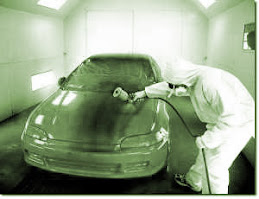 PMCLogic powered by ComputerLogic, Inc
ComputerLogic is a 30-year veteran of software development, focusing primarily on the automotive industry. ComputerLogic has developed applications for body shop management, inventory and accounting control, and is perhaps the best-known provider of paint information software in the industry. Our many years of experience working with Collision Industry professionals have enabled the ComputerLogic staff to develop this powerful new software product, the first, truly researched paint and material costing system that is linked to all of the major estimating systems.

Paint and Material Compensation and Cost Study by Steve Lanza

From Red to Black by Lee Amaradio
http://www.bodyshopbusiness.com/Article/15945/from_red_to_black.aspx